Sign up so you don't miss any Fabulous Posts Here:

I finally finished Insanity Max 30 - about 4 weeks later than anticipated due to our poor Truck accident. 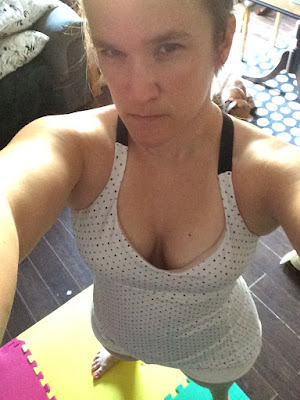 I lost a few inches throughout this workout program, fit loosely into capris I bought last summer (no more muffin top!), and can hold my squats.


This program was awesome for my legs and caboose, but for my arms - I preferred P90x3. P90x3 used weights, and I had better results in muscle building/fat burning. I also didn't have to spend 5 minutes doing Pushups - which I regressed at in Max30, as I really didn't have the strength to attempt them without being on my knees. I always Maxed Out on the push Up and Tricep Dip portions. Thank goodness that wasn't every day.


But hey, I got out there and did the best I could do.


Now to decide - do I want to try out the 21 Day Fix workouts to break away from Shaun T for a few weeks before I start his new program, Cize? I am SUPER excited about Cize - it comes out this week. Shaun T used to be a backup dancer for Mariah Carey back in the day, and Cize is basically the end of Exercize. Turning basic cardio moves into dance moves to popular songs in 30-40 minute workout sessions over a period of 4 weeks.


I used to be a good dancer back in the clubbing days of Toronto. Back then I also didn't care what other people thought of me, and I just went out and felt the music. Being in darkness and funky lights also helped.


Now I'm insecure with my dance moves, and aren't quite as agile as I used to be. I have to stop being paranoid about what others think of me, and just get my head back into feeling the music.


I ordered my FREE Insanity Max 30 t-shirt from Beachbody last night - I should be sporting it within the month.

All I need for motivation is free stuff. And getting back my rock hard body.


There really aren't any negative aspects of doing these workouts. In the comfort of our home. With my own private audience consisting of Gideon, Fynn, and Merlin.

I'll post in a few days which workout I decided on - stay tuned!

I admit that some mornings, I just can't do it all in under an hour.

In this time, I have to shower, make myself look presentable, hope I can dress in clean clothes that look ok in the dark, feed the birds, go downstairs and feed the dogs, make lunches, let dogs out, remember pants, and take my vitamins.

I usually remember my pants.

And normally don't have matching socks.

And yes, I know I should make lunches at night, I just don't always have the enthusiasm after biking, making dinner, possibly working out with my man (Shaun T), and having some R & R time with my other man (aka Husband).

So I have a back up plan for morning that don't include an extra 5 minutes.

I revamped the original recipe a bit (*) and cook it in the crock pot, as I generally cook spaghetti sauce at the same time (ingredients are fairly similar).  Two of our stove burners don't work, so I can only cook in one big pot at a time.  It's called kitchen compromise.
Gather

I'm making this today, as Friday I was in a rush, and realized I had no chili as a quick lunch back up and had no time time make my salad medley.
I'm thinking of adding some of our garden items, like green onions and spinach, but am not sure if that's too weird or not.  We'll see how I feel in an hour.
More great recipes to come from my old school binder cook book.  I got rid of the cookbooks I had, and just print out recipes I will use, and keep the recipes I like in plastic pages - to prevent ripping and splashes.  If I don't like a recipe after eating it, I just recycle the paper.

So, on June 13th, we were on our way home from MEC (aka Westboro) with some new biking gear. We were JUST going to pop into the house to change my shirt as Husband slobbered ice cream over it - The Merry Dairy ice cream to be exact - so we could satisfy our desire for a nice steak dinner.

Yeah - that didn't quite pan out the way we anticipated.  Two rights and a left away from our house, we were stopped at a red light.  Light turned Green and there were 3 or 4 cars ahead of us, thus, Husband's foot was still on the brake.  I looked at the rearview mirror, and saw this big pick up truck coming towards us, and thought nothing of it.

2 seconds later, all I heard was a crash, and I started screaming for some unknown reason for 1-2 minutes.  Husband was scared, as he had no idea why I was screaming or if I was hurt.

The pick up truck, on a nice sunny day, with no sun in his direction, somehow missed the brake lights on our BRIGHT RED pickup truck, and hit us (0KMH) going about 50-60KMH.

The result? Husband was really confused and sore, my right leg was bruised and swollen, the back of my head hurt like a &#$*%, and I had no idea what had just happened.

I was mixing up my words WAY more than normal, and delayed in my responses to people asking me questions.

I couldn't remember which was my Left or Right (even doing the old make-my-fingers-into-an-L-to-figure-out-which-is-left childhood trick).

An Ambulance arrived quite quickly, as did the hot police officer.  I remember that.

I was the only one injured enough for the ambulance to take in.  They asked me questions, did some tests, and told me I had to go to the hospital.  As we were so close to home, and Husband would have to pay for parking anyhow, I declined, as Ambulances charge $45 for a ride these days, and I could walk (painfully) - I wanted to avoid my leg from stiffening up.

They need Uber ambulances I think.

I signed my Waiver, and saw the aftermath.

The car in front of us saw the driver not stopping, and had enough time to pull up, thus they only had a minor scratch on their Audi.  They stood with us, and were quite irked at the Truck driver.  None of us really talked to him.  I never did find out if he was looking down, texting, or just zoned out at the time of the accident.  The Audi couple suspect he was texting, as he was looking down as he approached us. Only the police and insurance know (and the guy) for sure.

We gave our statements (well, Husband more than me, as he was driving and coherent), and Husband and I walked away.  The truck was undriveable.

Little did we know at the time, the whole front end was shot (we were able to change gears without the clutch - not good in a Standard vehicle), it was buckled at the front, passenger side was buckled out all the way (like at a 45 degree angle in the middle), the truck bed pushed into the back of where we were sitting (hence smashed glass, and injuries)....and the repair shop stopped counting repairs without even taking into consideration the internal damages.  Little Truck was a write off :(

This isn't what was supposed to happen - Truck is paid off this month (July), and we were supposed to use its payments towards replacing the 2003 Mazda Protege (my car) which has about 285,000KM on it.  Great car...just that was the one that required replacement!  When it dies, we'll figure out what to do - will we just stay with the new vehicle, or replace the car too?  Maybe if I get a super grand raise at work or something (ha ha) that could compensate for a second car payment (ha ha).

Back to my injuries.  We spent 3 hours in the emergency room from beginning to leaving the hospital.  It was not too bad - we even ran into one of Husband's old friends who had moved back to Ottawa.  Small world!

The Doctor was actually one of the best doctors I've seen in years, besides my Naturopathic MD.  She was funny, asked questions, and had great bedside manner.  It made a frustrating and scary experience better.

I was diagnosed with a Mild Concussion and told to basically sit in the dark and rest for the next 7-10 days.

I could watch my tv series on Netflix for short periods of time during the day (in the dark living room), stayed off my phone and computer for the most part, and finally had a coherent conversation with Husband 5 days after the accident happened.  My brain literally hurt.  If I exerted myself, it pounded to let me know, "slow down".  The best way to describe it is a numb throbbing.

I couldn't multi-task until the following Thursday (so almost 2 weeks after the accident) - I'm all about the multi tasking, so this was weird to NOT do it.

I didn't bike until 2 weeks after the accident (a lowly 30km), and we turned around when I started feeling weird.  I didn't work out with Shaun T for the first time until this past Wednesday, as I couldn't - I got way too confused and my head throbbed.

I credit the fact that I only had minor pain in my shoulders, back, and neck from the impact to actually being fit.  I literally have been strengthening my shoulders, neck, and back with working out almost daily since the end of October 2014.  I am SO surprised my injuries weren't worse than they were.  Who knew being fit could also help you recover from or have reduced injuries from an accident?

I'm pretty much back to normal now, but it shows you - every choice you make, place you go...it can change your plans in a flash.  Take each moment and live it.  Don't live with regrets and "I'll change it later" attitude.  You have to choose what you do today - because life's nails in the road come without notice.

Do you really want to look back and not be happy with your entire life?

I am thankful we only lost a vehicle, 3 weeks of my "normal" life, and some financial insecurity.  A week after our accident, a friend's sister was in a car accident where she was airlifted to the hospital, was in ICU, and has months of recovery ahead of her.  I also lost a human Ridgeback acquaintance of mine during this time - not much older than we are.  That's terrifying.

Live in the (logical) now.

I have Jazz Hands, love Sparkles, Workout in the dungeon basement to Beach Body Programs & You Tube Yoga, and am a Sewing Machine.
Really - I am!
I am owned by my Husband, Rhodesian Ridgeback, and 3 parrots (the awesome, weirdo, and crazy nut), and would like to take you on my new cabin river lot, sewing, product review, fitness journey of life!