Sign up so you don't miss any Fabulous Posts Here:

Our Hearts are Breaking - For the Love of Gideon 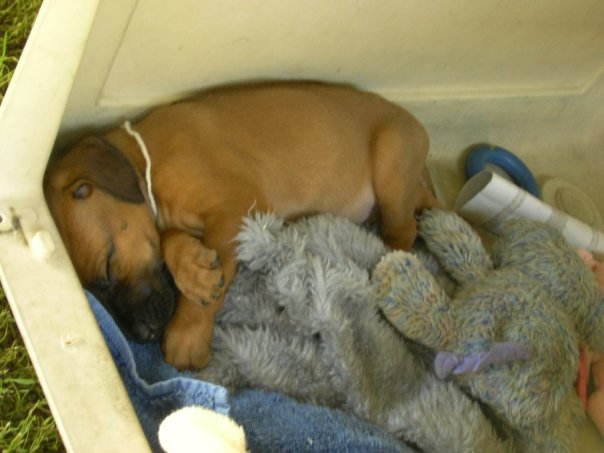 
Gideon had his annual check up, and I was concerned about swelling on his leg that had started 2 weeks prior when he came home from his grandparents after we went away for the weekend.  We figured him and Fynn had bumped bodies too hard while playing or something simple and normal like that.


It wasn't a good day, so I waited in the car while Husband brought Gideon in for his check up. 10 minutes later, I got the text that just broke my heart.


"Gideon has bone cancer in his leg."


"Untreatable, except for amputation. He's checking to see if it's made it to his lungs."


The tears started falling uncontrollably. I walked through the parking lot in a daze, past the receptionist, into the exam room, and just held Husband and Gideon.


I remembered when Gideon was chosen as a puppy - we just fell in love instantly. We spent 2-3 afternoons a week at the breeders playing with the pups (and having ankles bitten during their teething phase!) 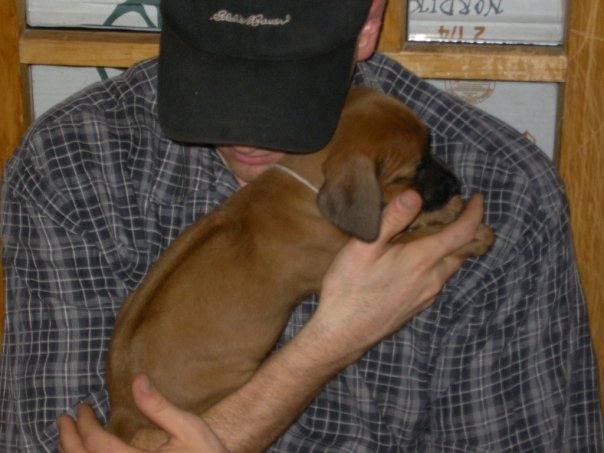 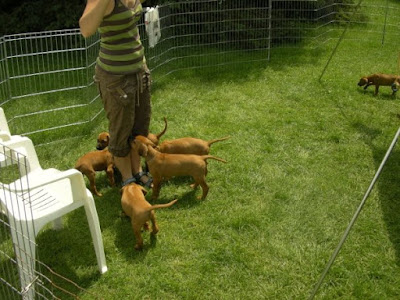 The vet came around the corner and looked at me gravely. We went to the other room and he showed me the leg x-ray - I could instantly see the tumour enveloping his front left knee, and a patch at his shoulder - it had spread. This thing grew from unnoticeable to this in 2 weeks.


Ever since Fynn had his side flank tumour removed a few years ago, I paid close attention to every lump and bump on our boys - the paranoid already within me.


When he brought up the lung x-ray, before he told me, I saw 5 spots. The F'n cancer in his lungs.


With the spread of the cancer both in the upper portion of his leg and the lungs, we just had time and options to help ease discomfort and pain.


Chemotherapy isn't very effective - and only gives an additional few months to life with us - and wouldn't give him quality of life. Dogs with Osteosarcoma who have the affected limbs amputated AND chemotherapy MAY have upwards of 5 months to a year of additional life.


Being a top heavy older dog, that wouldn't be fair to Gideon - he has only known life with 4 legs, and is at the age of becoming unsteady to begin with.


There are many theories as to why this kind of cancer occurs - age of neutering, large breed dog, genetic disposition, etc. And how we could of caught it earlier...I don't know.


He has had what appeared to be an autoimmune issue, causing his nails to become brittle and fall off one by one for a period of time, but with treatment over 4-5 months, his nails grew back slowly and normally (no longer brittle).


He has a few black moles that last year the vet indicated were localized skin tumours, but not the type that spread systematically.  There was no reason to remove them unless we went in for something else - why anesthetize a pup unnecessarily?


He had ear infections the first year of his life, and went through 3-4 food types before we found one that would work for him.


For the mostpart, he has been a healthy pup. Full of energy and zest. A good big brother to Fynn, and loving to all the people he meets (with the exception of one person, but that's totally understandable!) 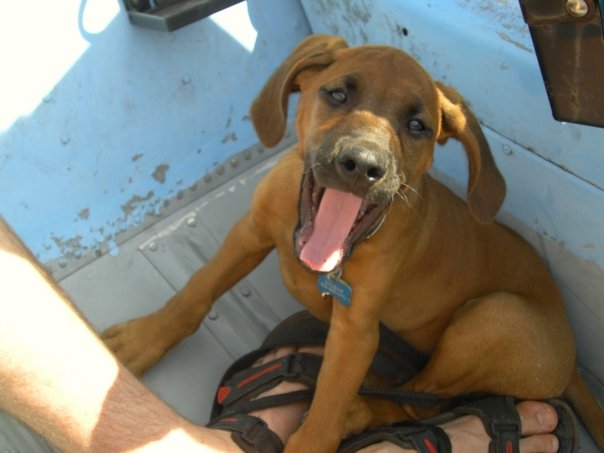 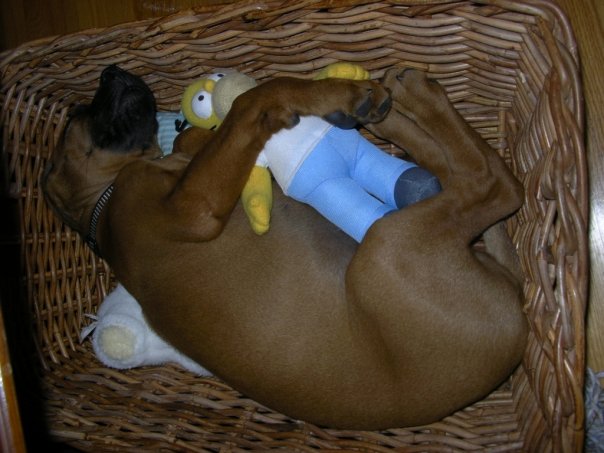 He has a prescription for medication that will help ease the swelling in his leg, and he gets some special cookie when he's having a rough day or we just need to calm him down and he needs to rest.


The only sign that I can recall is a month prior to this visit the dogs didn't play Ridgeback style. Fynn was being cautious around Gideon (who he ADORES - Fynn is a dog dog and is lost without Gideon - you didn't hear the howling as we left for the vet visit in the first place). 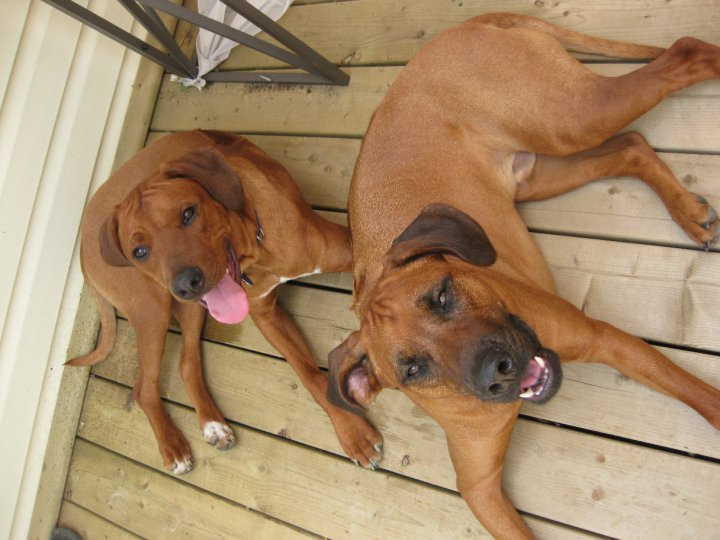 This cancer will weaken his bone - it deteriorates it over time, and can cause pain.


We are having helicopter parent moments now where we encourage him to walk gently down the stairs, not to jump or hop as he normally dogs, and definitely NOT to play with Fynn.


How do we explain to his annoying little brother that he can't play? That he's sore? That we love them both?


They both get human treats now (particularly meats & protein based foods) - never allowed before.


They both sleep in our bed - rarely allowed before.


They both get so much love and snuggles - it's ridiculous. 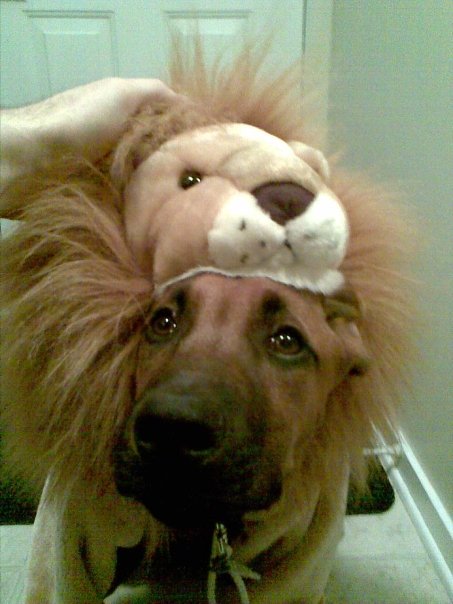 
Until the time comes that he tells us he is ready to physically leave us (we will never be ready for this step, and have my in-laws on call to take us to the vet at that time...we'll be in no shape to drive), we will have no regrets, and ensure his tail wags every day, he gives happy kisses, and knows that he is adored beyond words.


Having this time is good and bad. Good, as we have this time for no regrets and extra love. Bad, because we know the end is near. We won't let him suffer - when he is in obvious pain, no longer wags his tail, no longer eats, is not having quality life...we will have to painstakingly make the decision before he becomes sad and scared.


I will look at moments like him sleeping on Jamie everywhere as a puppy: 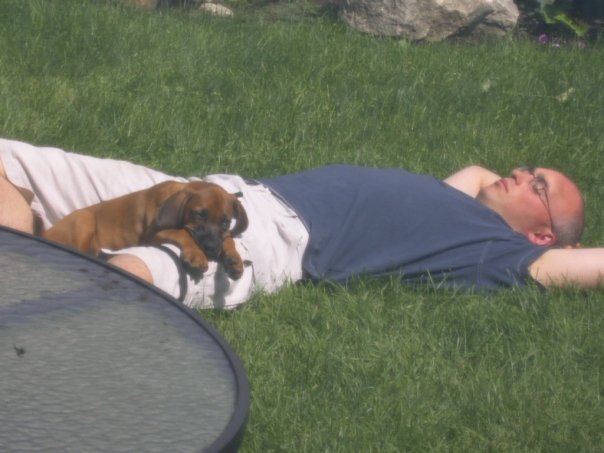 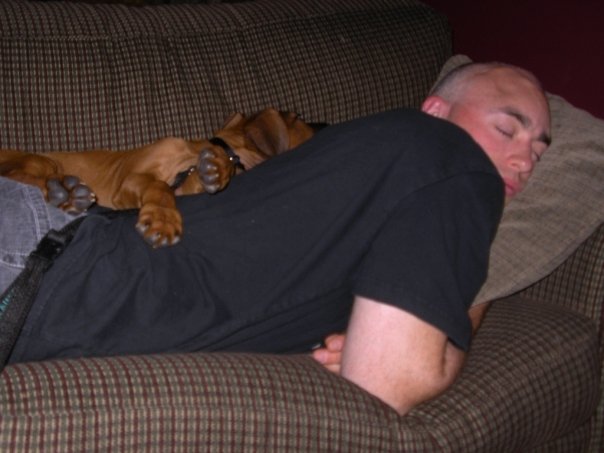 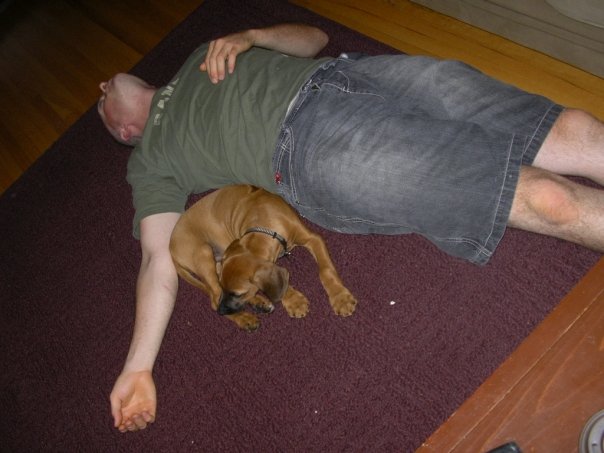 His love for lion stuffed animals (irony of the Ridgeback) 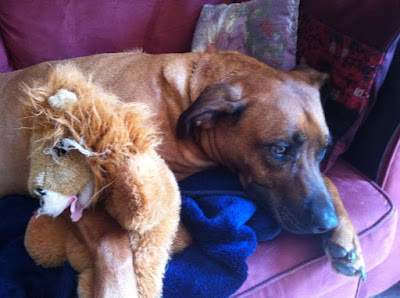 His desire to kiss everyone 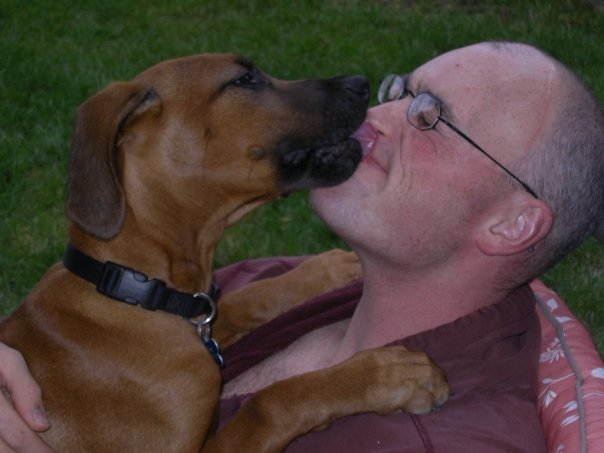 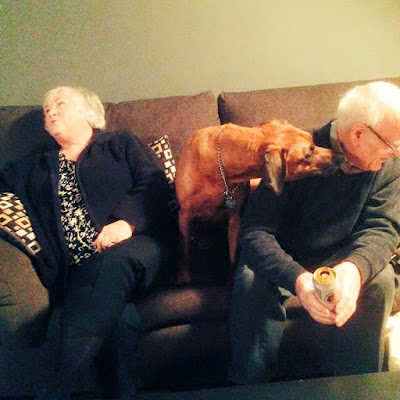 How he was an awful backseat driver 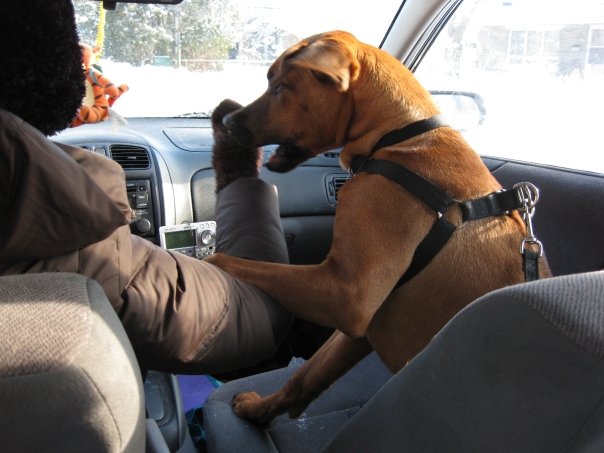 How gentle he was with Kitten aka Saxafrass 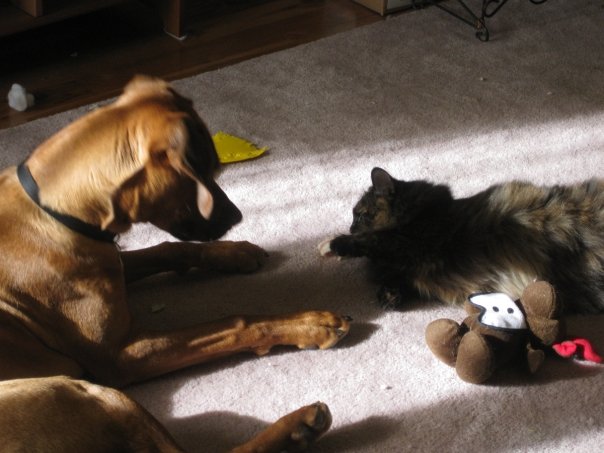 How he was always ready to chase and play 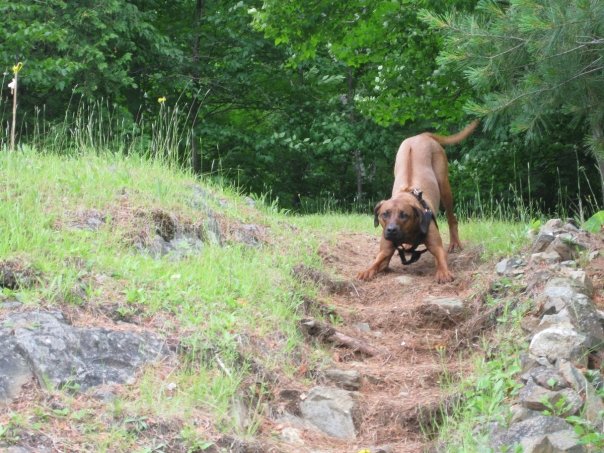 How he was and will always look over us 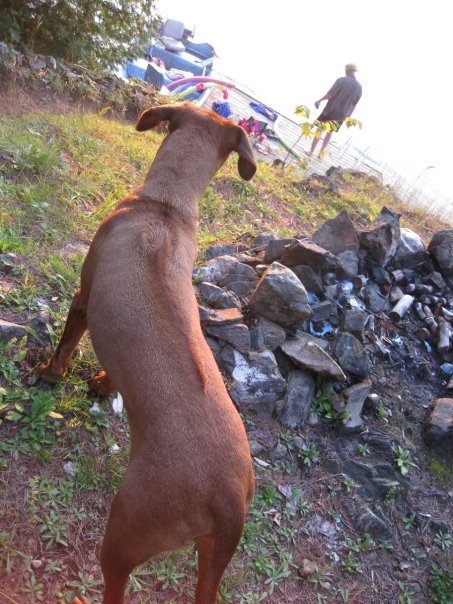 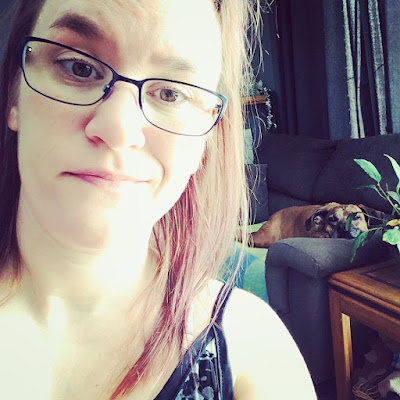 How handsome he was 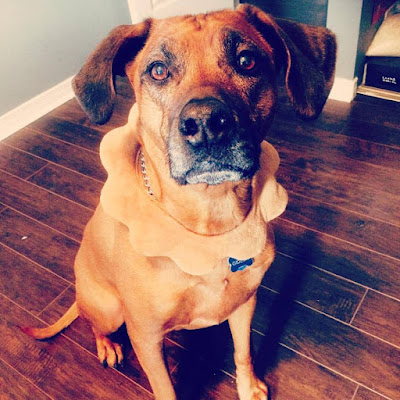 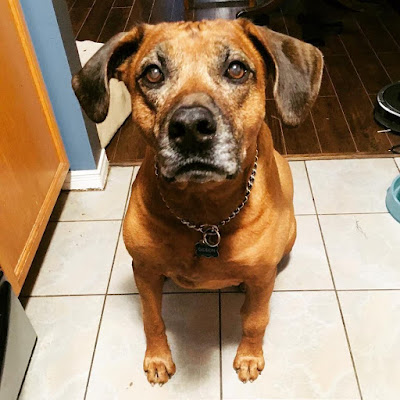 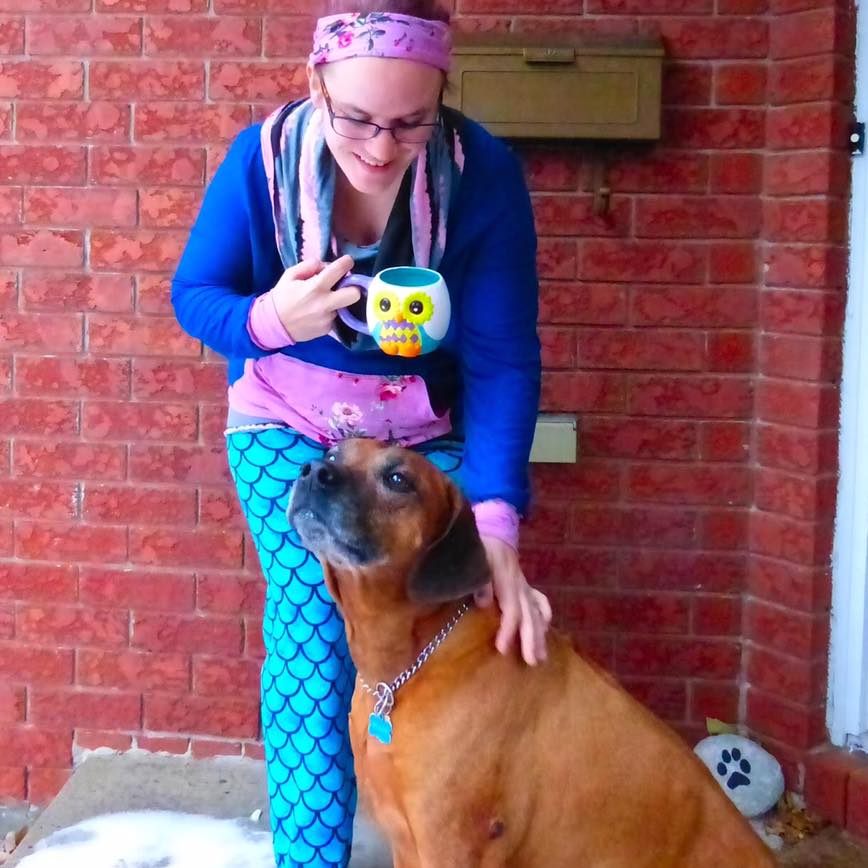 How he matched his sewing room chair. And didn't share it well with others. 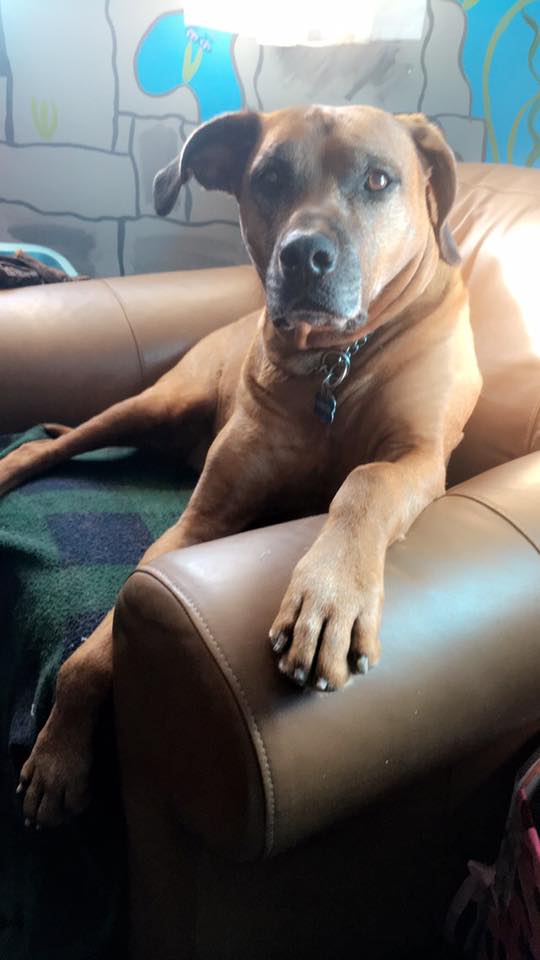 How I don't want to let him go. 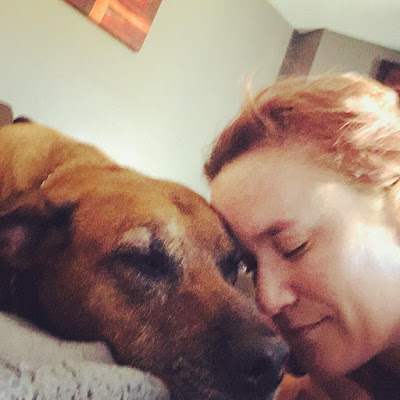 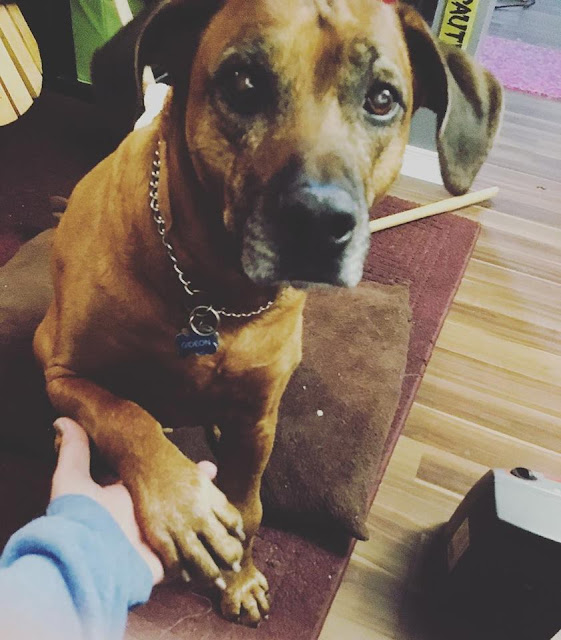 We love you forever, Gideon. Be strong. Be Brave.


And Fuck You, Cancer.

I have Jazz Hands, love Sparkles, Workout in the dungeon basement to Beach Body Programs & You Tube Yoga, and am a Sewing Machine.
Really - I am!
I am owned by my Husband, Rhodesian Ridgeback, and 3 parrots (the awesome, weirdo, and crazy nut), and would like to take you on my new cabin river lot, sewing, product review, fitness journey of life!